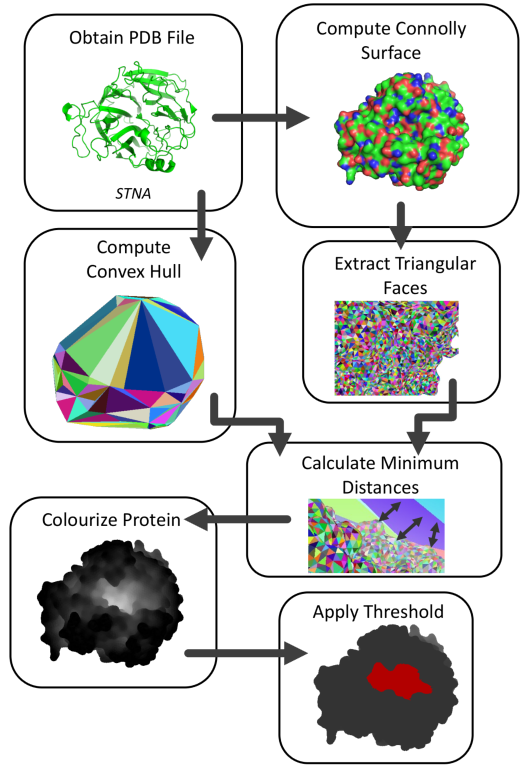 The steps within the 3DPocket algorithm are as follows:Once the predicted binding sites have been computed, it is possible to compare these binding sites to the actual binding sites using the following procedure:
Computing the Convex Hull (Quickhull)
In 2 dimensions, the Quickhull algorithm involves the creation a triangles bounding the interior points recursively. It can be broken down to the following steps: 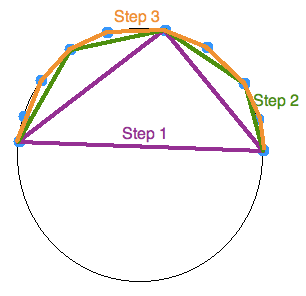 When extending Quickhull to 3 dimensions, tetrahedrons can be used, analogous to triangles in 2 dimensions:
Calculating Minimum Distances
To determine the distance from the Connolly surface to the convex hull, the Connolly surface is first converted into a polyhedron with triangular faces, and the centroid of each face is determined. Then, a plane is constructed from each triangular face of the convex hull, and the point-to-plane distance is calculated between each centroid and every plane (an arbitrary vector connecting the point to the plane can be projected onto the plane’s normal). Next, the minimum distance calculated for each centroid is used to assign a score for the triangular face.
Applying Confusion Matrices
​To determine the performance of 3DPocket, a confusion matrix is generated. Such a matrix compares predicted binding sites to those determined experimentally: 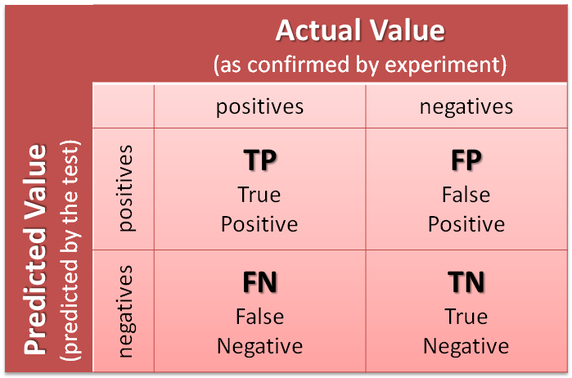 ​Then, the accuracy (ACC) and Matthews Correlation Coefficient (MCC) are used to gauge performance against previous algorithms: